Proposing a work for New York, a city I have only visited very briefly once, and with Anya, an artist I have only met through skype, was a challenging experience. As I began research on this project I chanced upon a collection of speeches by Emma Goldman. As I re-read one of her speeches from New York I was struck by a collapsing sense of time. One hundred years ago Emma Goldman was arrested for distributing information on birth control for women. Today this question has reinserted itself into the political landscape with renewed force. History loops and twists and turns. Victories are won and defeats endured. Struggles grow and grow. This action pays tribute to a fighter who imagined the city of New York differently. - Zanny Begg 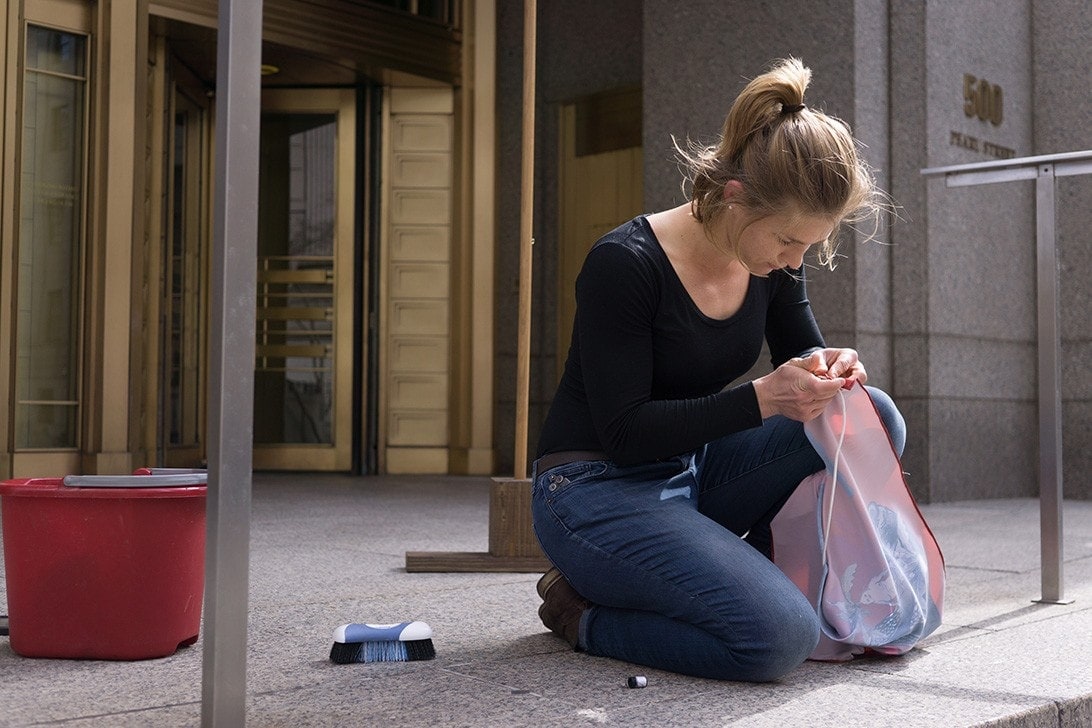 Witnessed by Anya Rosen: My art practice includes very little performance work so the process of preparing for this project was unfamiliar, uncomfortable, and exciting. I wanted to be confident and convincing but with no acting experience I wasn’t sure how to approach preparing. I felt a duty to perform well not only to my Australian artist counterpart, Zanny Begg, but to Emma Goldman, the woman who originally wrote the speech I was going to deliver. 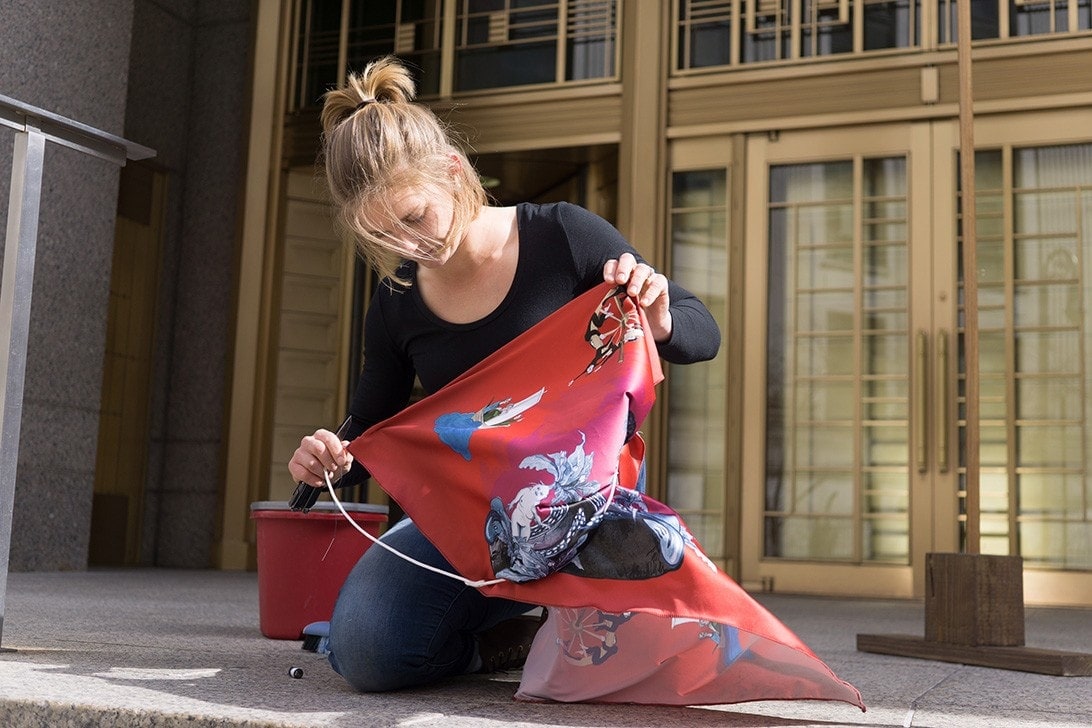 I thought about Emma a lot when I was memorizing her words - what kind of person she was, if she was serious and tactful or fiery and wild, and how it might have felt to give that lecture in 1916. As the date of the performance neared, I was surprised how much ownership I felt over the ideas I was preparing to deliver. Each time I recited it I felt my conviction grow. I began to speak as if her words were mine.

The performance took place in front of the District Court in Manhattan on on March 4th. It was a cold and windy afternoon. My hands shook as I sewed the flag to the rope. People watched in silence. I felt completely exposed and hyper aware of my body. I didn’t expect to feel objectified but the experience of being a woman and kneeling on the pavement and sewing while people watched made me feel both vulnerable and feminine. As I began to scrub the floor and speak my self awareness dulled. People were no longer only watching me but listening to me as well. Noticing this shift in dynamic was empowering and encouraged me to project my voice. I wanted them to hear what I had to say. 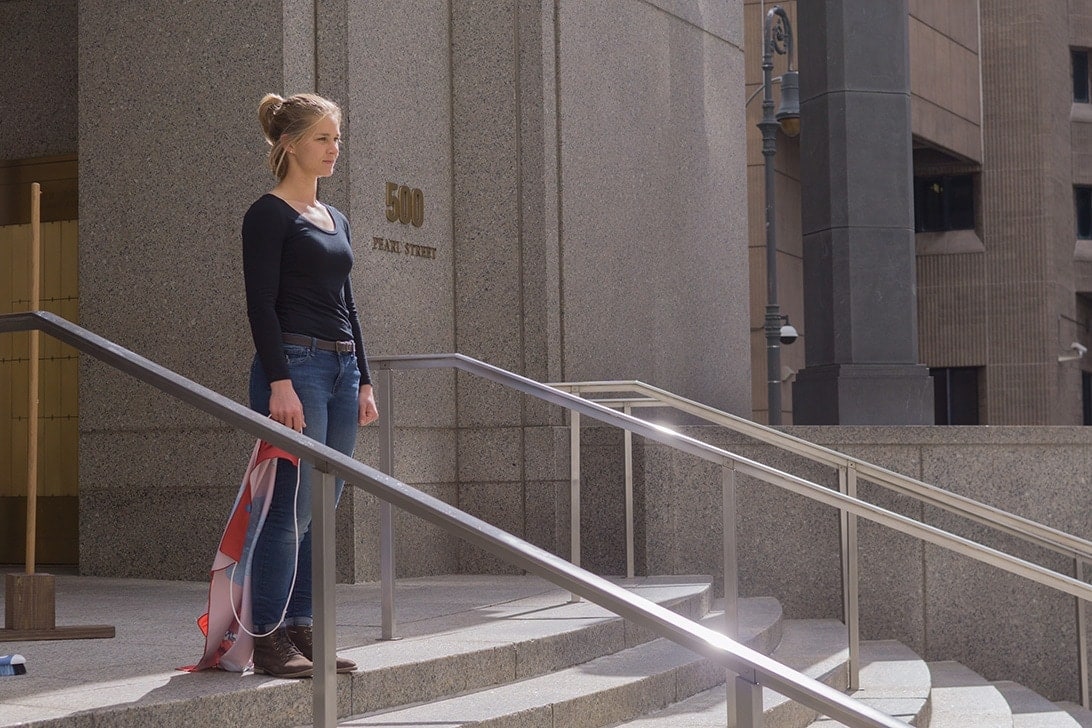 In retrospect, it was the performance itself that answered a lot of my questions about who Emma Goldman was as a human being. Experiencing the feelings of power and control that followed my vulnerable silence made me feel close to her. I could imagine that she and all those who fight the status quo and advocate for change often have this experience of feeling simultaneously powerful and defenceless. Sharing her words with my community helped me understand the incredible courage she must have had to use her voice during a time when she was surrounded by those who wished her to remain silent. 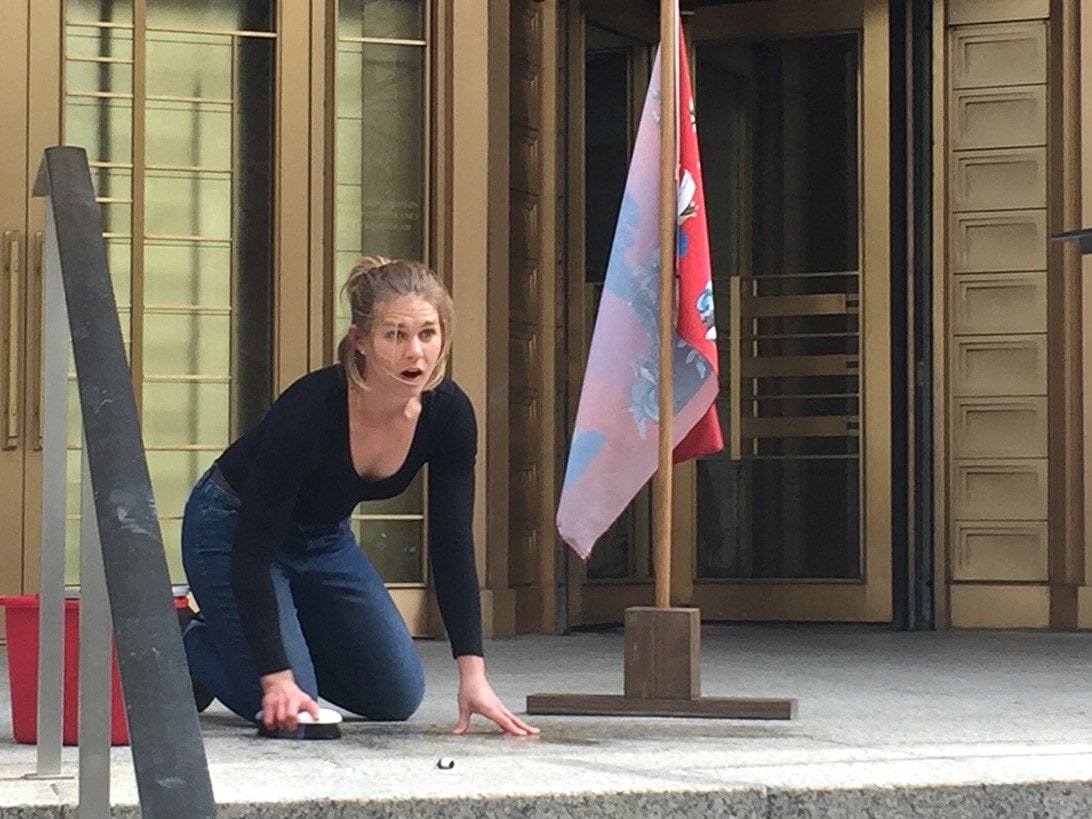 Witnessed by Jill O’Bryan: Witnessing Anya perform was transformative. Watching her sew and scrub while speaking Emma’s words profoundly humanized the politics, making it intimate and very real. Anya spoke with conviction, mind and body engaged and projecting. It was clear that the words of Emma moved her, and she moved us with their power, 100 years after they were spoken. It is astonishing that Emma’s words remain relevant and necessary. Thank you for speaking them! (Just for the record: in 1921 Margaret Sanger opened the first birth control clinic in Brooklyn, NY. It became Planned Parenthood in 1942, and while always under threat, never as completely as now. Under the Trump administration one of congresses first votes was to overturn the Obama-era rule banning states from denying federal funds to Planned Parenthood.)