So we called out and the artists called back and from this most basic form of communication, The Telematic Studio was born. It was just like the opening scene from 2001 Space Odyssey. Exactly like this. 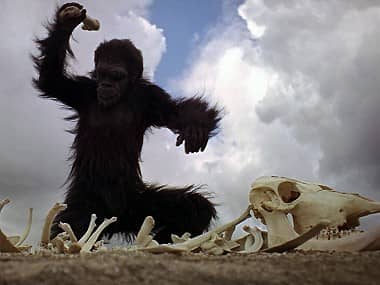 The one big problem Christy Dena and I faced, was that so many amazing artists called back and we have only so many places in our studio. We were faced with the painful task of saying no to some very talented artists we would have loved to get to know. It helped that we decided to select for diversity as much as for quality, feeling that the mix of people was going to be what will make our experiment the most interesting. We tried to mix people from regional and urban Australia, with a couple internationals for good measure. We chose artists from across disciplines, from sound to installation, to film makers, poets and composers. It is our hypothesis that a conversation between artists from such diverse backgrounds and practices will produce the kind of rich and magical interaction that stretches thinking, challenges and changes how we make the things we make.

For those who were not successful, we are hoping to do more of these studios and sincerely hope you reapply.

The studio sessions will be a closed affair, giving the artists the privacy to explore, experiment, and play without you lot looking over their shoulder, but we are hoping to bring out the occasional report, showing off some of the stuff we are discovering. We will keep you posted as we go along.

But for now let us introduce the artists:

Alana Hunt is an artist and writer committed to sensitively challenge ideas and histories in the public sphere and the social space between people. She lives on Miriwoong country in the north-west of Australia and has a long-standing relationship with South Asia, and more specifically Kashmir. These places have shaped her engagement with the violence that results from the fragility of nations and the aspirations and failures of colonial dreams — themes that run through her work in quiet yet consistent ways. She is driven by the capacity for art and cultural discourse to intervene in and shape the public sphere. She works with the internet, public space and the media as artistic mediums alongside more conventional mediums like photography, video, text and installation.

Aleshia Lonsdale is a contemporary Wiradjuri artist living and working in Central Western NSW. She works mainly in installation and sculpture and focuses on a number of different themes including: identity, environmental issues, traditional and contemporary culture and works responding to place.

Beth Dillon is an interdisciplinary artist who works between Australia, Switzerland and elsewhere. Her itinerant practice engages with stagings of site and self in contemporary visual culture. Her work flirts with tensions between situations of labour and leisure; home and holiday; local and visitor; sightseeing and research; and artist and audience. Combining elements of costumed performance, text, video and mixed-media installation, she often plays with the gestural vocabularies and irreverent attitudes of a slapstick sensibility, experimenting with encounters of bodies and objects within spaces of the gallery, the festival and the great outdoors. ​

Gabrielle Bates works across painting, sculpture, video and installation to explore intersections between place, politics and esoteric practice. Recently her work has extended to performance as she is keen to produce less “stuff” and more “experiences”. Her recent research completed at UNSW Art & Design explored how rituals and objects associated with Witchcraft can be used to challenge gentrification and questionable urban development.

Karen Golland is a contemporary artist based in the regional city of Bathurst. Her art practice cartwheels through many artistic disciplines with a particular interest in textiles, assemblage, collage and site-specific installation. She has recently expanded her interests to include new and emerging technologies including virtual and augmented reality. Whilst her art-making practice details personal and intimate experiences, the process she follows to develop the work is linked with collaborative making practices. Since 2012 her artmaking has involved large-scale, site-specific installations composed of thousands of handcrafted items. This way of working began when her partner and fellow artist Steve Kirby was diagnosed with terminal cancer. The act of winding materials to create a pom pom became a way of focusing attention. The bright colours and silliness of these quickly wound creations stood in stark contrast to the measured clinical world that surrounded them.

Kath Fries is a visual artist interested in the ways that we are entangled with our material and immaterial surroundings through our senses, memories and relations; and how being attentive to such embodied experiences can nurture empathy, care and compassion. Her developing meditation practice is closely linked to her art practice; as the Buddhist philosophies of impermanence, interdependence and present time shape her approach to making and her engagements with the complexities of ecologies and climate change crisis. She mostly creates site-responsive sculptural installations, combining research and layered histories with her personal experience of time and place.

Keira Simmons is a sound designer, acoustic ecology enthusiast, and sound artist. Her primary medium is field recordings and audio files, which she manipulates to create sound compositions sitting somewhere between sound art, music and poetry. She typically works with field recordings from natural environments and everyday life by pushing each source material beyond its expected limits. She creates emotionally affective atmospheres through psychoacoustics, especially in her sound design work. Her recent senior thesis project, Listening to Abu Dhabi, is an urban audio walk exploring climate change through a timeline of soundscapes, and typifies her research-focused interest in sound design and acoustic ecology.

Louise Salter is a London-based creative who is passionate about manifesting meaningful experiences that encourage depth and connection; both in relation to ourselves and each other. Whilst her slate of film projects are in development, Louise is interested in exploring through the Telematic Studio how one creates an entertaining immersive theatre experience for a varied audience (young, old, some experiencing immersive theatre for the first time, others being avid immersive theatre goers) whilst providing a level of depth, impact and sense of connection to the science-fiction world within the piece.

Maize Wallin is a composer, sound designer, and audio programmer working predominantly in videogames. Their practice explores how videogame players can experience musicianship through instrument-game hybrids that allow people to bypass the sometimes intimidating history of traditional instruments, in approachable and playful ways. Maize’s work also aims to engage audiences in live music in new virtual, interactive, safe and accessible ways. NoiseDrawers is a Virtual Reality instrument, that puts the player in a room of drawers, each with a different musical and sound behaviour when opened and closed in expressive ways.

Thuthukani Ndlovu is a spoken word artist (poet) and upcoming digital artist, living and working in Bloemfontein South Africa. He writes and performs poetry, as well as hosts poetry workshops that explore collaborations between poetry and digital arts (and soon will be exploring more visual art disciplines). The objective of such workshops is to provide poets with the opportunity to see how poetry can be further developed or translated within a different artistic medium. The workshops also focus a lot on collective collaboration (so poets and digital/ visual artists created themed work together from the start). His work touches on Social Activism and Love.

Telematic Studio will be wrangled by our two facilitators:

Alex Wisser is an artist and creative producer. After graduating honors from the National Art School, he became an active member of the Sydney ARI scene, founding and acting as co-director at a number of art spaces and initiatives in Sydney. In 2013, Alex co-founded Cementa Contemporary Arts Festival in Kandos NSW. This festival engages artists with the social, environmental, and cultural context of the small town that hosts it. Alex’s individual arts practice has recently developed through large scale, long term projects like Cementa and Kandos School of Cultural Adaptation into a cross disciplinary, community engaged practice exploring the potential of art to participate in everyday cultural contexts, especially the regional context in which he lives and works.

Christy Dena is a writer-designer-director. Christy began in theatre as a performer and skit writer, and completed her undergraduate in theatre and performing arts at Monash Uni. She moved to producing digital effects for TVCs and TV shows, and then CD-Roms and websites in the mid 1990s. In the early 2000s, Christy jumped into making alternate reality games and completed her PhD in Transmedia Practice at Sydney Uni. For the past decade, Christy has been making live games, installations, Apps, and working with filmmakers to extend their work to the interactive space. Her events include the Forward Slash Story international lab for creatives working in the fringes, supported by the Digital Storytelling Lab, Columbia Uni; Crafting Intangibles online event for interactive narrative design; and the Extended Experiences Lab. Christy has run over 25+ remote studios with interdisciplinary creatives, and is always experimenting with ways to nurture her own and others’ creative work to answer their calling.