One of the great things about having a steady stream of artists coming through your town on residency is that occasionally one of them will give you something special in the form of a performance, talk or event. Last Friday we were fortunate enough to have artist Malcolm Whittaker host one of his world famous Ignoramus Anonymous support groups at WAYOUT ArtSpace. Kandos gets the prize for the most amount of ignorant people to show up for one of these events (20 local folks showed up). Malcolm very kindly spun this as a positive, reminding us that if the first step in addressing a problem is to admit to it, then Kandos is way out ahead of the curve. 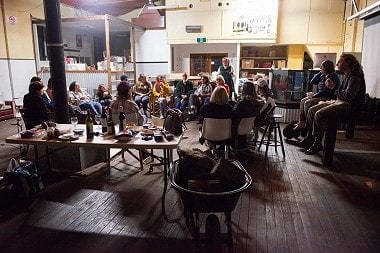 The meeting is actually meant to be a support group rather than an attempt to cure it. It is designed to allow folks to air their ignorance, to own it and share it in a non judgemental environment, rather than an attempt to cure it. And share our ignorance we did. Politics to the interwebs to language and all manner of things I cannot remember or recall, or did not understand at the time they were discussed. The brilliant thing about it was that the conversations always seemed to curve round into just talking about stuff we were curious about or that we thought others might be curious about. I cannot think of another event that could be said to achieve the same end, just get a whole bunch of people talking together. Even after the meeting ended, the majority of us hung around talking about things we were mostly ignorant of, drinking the last of the wine and huddling near the fireplace. It was a wonderful evening and there was even talk of making it a regular thing.

Thank you Malcolm Whittaker, wherever you are!

Cementa Inc. acknowledges the Wiradjuri people as the Traditional Custodians of the Country upon which we live, learn and work. We honour their Ancestors and pay our deepest respects to their Elders, past, present and emerging.