The talk of the town began when we announced that we were closing the swimming pool for part of two days of the festival. This, it turned out, was on the first really hot weekend of the year, and created an unexpected backlash in the community. This tension was picked up by Gina Fairley who wrote a challenging review in ArtsHub. What causes a regional arts festival to falter ArtsHub Australia. The response on our facebook page was robust. You can read that here Gina and ArtsHub allowed us to write a response Facing Challenges, not Faltering. Cementa replies.docx here 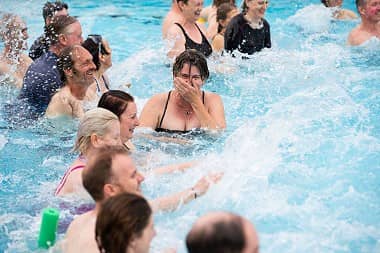 The response on our facebook page was robust. You can read that here

For those who don’t do facebook, here are two significant responses which we felt were central to the conversation:

LETTER FROM A LOCAL by Rod Lefley

Gina Fairleys final parting shot at Cementa in her recent review of the arts event held at Kandos of “trying to be all things to everyone” imputes a narrative that doesn’t exist. Now approaching the age of 65 I am reminded that my ancestors both European and indigenous were caretakers of the environment around Kandos / Rylstone. Sooner or later this responsibility will move onto my adult children and they are well equipped to take up the challenge. My daughter is an art teacher , my son a mathematician. In the later stage of this existence on earth I ought to be able to take just about anything on the chin, but to be honest, I do feel a little insulted at Ginas simplistic summation of the relationship of the locals and art community. She makes an assumption that there is a line in the sand between the two. Her deduction implies that theirs is a fierce almost patriotic division between those who see the dolphin in the scribble and those who don’t. It’s simply not true. Kandos has been an eclectic town long before the word was taken up by the purveyors of the arts. Being eclectic means that a broad range of ideas can be considered without any particular ridicule. While Sydney was built on Kandos cement, Kandos was built on the friendly eclectic mixture of poms, balts, wogs and dagos. Immigrants from all over the world converged on Kandos in the mid twentieth century to work in coal mines, the local cement works and agriculture. Kandos became a melting pot of working people from various intellectual and cultural backgrounds. A sombre visit to the local cemetery or perusal of the electoral role for Kandos or Rylstone reveals a legacy of surnames that are composed of names ending with ‘wicz or ‘laus than ‘smith or ‘fellow. Up until recently you could still hear accents from the Baltic Nations in the local pub or supermarket. The implication that Kandos is a town seeped in discrimination is neither truthful or rational. Of course there is a new “breed” of the “arty farty “ coming to the region. Like me, some of my friends think some of the creations presented in Cementa are a bit weird. Some of us like to look at a painting called “TREE” and actually see a tree, but Cementa stretches our minds and gives us a perspective into another world that otherwise we might not see had Cementa not come to town. Sure, you will hear a group of locals laughing and light heartedly bagging out the “new mob”, but that is all it is, a light hearted Aussie banter that doesn’t take others or themselves too seriously. Let an artists house burn to the ground in Kandos and see who comes out of the woodwork to help them get on their feet again. For those who have their roots in the area, Cementa can live besides the smell of burning rubber when the hot rods come to town or the aroma of horse sweat and cow manure at the local agricultural show. I’m not “into“ smoking tyres or contemporary “art” but please don’t infer I have an issue with those who are. I think those of my friends who sip coffee with me and gently shake our heads as our sensibilities are challenged by the newest picture on the wall would agree. Gina’s question of whether such an art event is suitable for a regional area is, to be truthful : divisive and insulting. It implies that Kandos is an unsophisticated hick town unworthy of an injection of another cultural exposure . Kandos history would say otherwise . 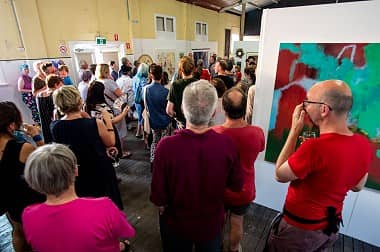 and this came from

“Massive shout out to Cementa for the ongoing support and inclusion of artists living outside of metropolitan centres. Not only have we been included, but we’ve also formed networks and made FRIENDS! AND ART FRIENDS TOO! OH THE JOY OF ART FRIENDS!! This year the festival had a strong line-up of regional artists including Steven Cavanagh, Harrie Fasher, Leo Cremonese and the Here and Not Here, a group of regional artists curated by Andrew Frost (Fleur Macdonald, Bill Mosley, Julie Williams, Amala Groom, Kim V Goldsmith, Amanda Penrose Hart, Sean O’Keefe and myself). There was also an incredible Salon show of local artists, featuring so many great works! Heaps of folk came from the city to visit, but many also came from the central west and further afield. Locals also checked out the art, as did those from surrounding communities. 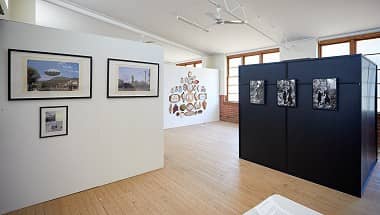 For many, it’s a four-day festival. For regional artists and people interested in contemporary art in regional Australia, Cementa is so much more. There isn’t much opportunity for artists to experiment and collaborate in the towns where we live. Our regional arts institutions cartwheel metro artists into our communities on a six-week schedule, so this is a model we know well. We are familiar with it, and we know its pros and cons. From my perspective, Cementa is cracking this model open and starting a much more interesting regional arts conversation. Yes, artists are coming to Kandos from other places (of course), but what’s happening around these artists is magic. Artists do residencies and also run workshops for people in Kandos and surrounding communities. For example, Deborah Kelly and Lucus Abela came to Bathurst and facilitated art-making sessions with young folk at the youth mental health centre. 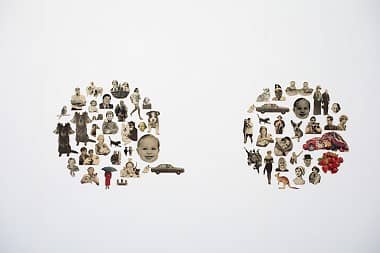 On a personal note, Cementa changed my life. I didn’t go to the first Cementa because I’d given up on art. I was grieving for my partner (another regionally based artist) and felt disconnected from the art world. My grief felt too big for me and too big for those around me. But it wasn’t too big for Cementa. They invited me and my unyielding pain to be part of it anyway. The Directors, Georgie Pollard and the broader Kandos community, gave me kindness at the time I needed it most. I will never forget this. It was also the first time in my art career that people asked, what do you need from us to help you make this happen? I’ve taken this question with me everywhere since and found it to be a powerful tool for working in communities. Cementa15 was tough. I didn’t know the other artists or festival-goers, and I felt inside out and vulnerable. Over the four days of the festival, I met so many people whom I now call friends. And each festival since, I’ve met a bunch more. Everything beautiful that has happened in my art career since can be traced directly to Cementa. I feel like a walking Ella Dreyfus map.

I also want to thank Gina for documenting her experience, which has given us this chance to share ours. Over the years, I’ve had many conversations that relate and link with many of these points. And I know the Directors have too. We live regionally, but we are not living in a bubble. Please, don’t make us choose. There is no benefit to drawing a hard line in the sand and putting art on one side and community on the other. Cementa is much more than complex than that. It’s about culture, opportunity, diversity, inclusion and connection. It’s an opportunity for us to connect, and find others also interested in art, in all its forms. Cementa helps people in regional communities find their people, and we need this. I need this.”

And finally the ABC spent three days shooting and interviewing folk for The Mix. This was a pretty balanced account, we thought and allowed us to talk about some of the ideas and strategies we are talking about.

And another video from the Mix.

Cementa Inc. acknowledges the Wiradjuri people as the Traditional Custodians of the Country upon which we live, learn and work. We honour their Ancestors and pay our deepest respects to their Elders, past, present and emerging.